This is an ONLINE event on www.lamakaan.com 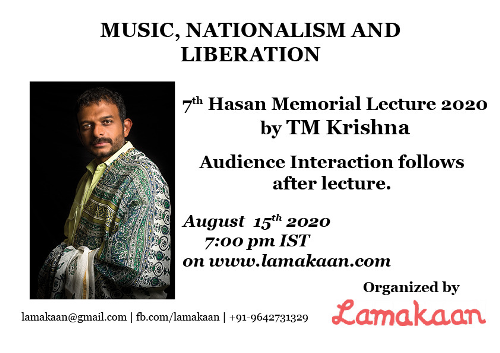 Nations and nationalisms are so often defined through religion, ethnicity, race, language, or even national culture. These seem to all belong, in one way or another, in smaller or greater ways, to a nation. But music, even as it belongs to the society or people can rarely be confined to a nation. So while religions or languages seem to stop at the border, music seems to cut past – connecting, touching, and embracing. And yet, even as we celebrate music’s ability to transcend borders, we must also remember the recurring affinity between music and nationalism. As a musician then how do you see the relationship between music nationalism and the project of human liberation?

As a vocalist in the Karnatik tradition, Thodur Madabusi Krishna’s musicality eludes standard analyses. Uncommon in his rendition of music and original in his interpretation of it, Krishna is at once strong and subtle, manifestly traditional and stunningly innovative. As a public intellectual, Krishna speaks and writes about issues affecting the human condition and about matters cultural. Krishna has started and is involved in many organizations whose work is spread across the whole spectrum of music and culture

The Hasan Memorial Lecture was instituted in 2014 and is held each year at Lamakaan on August 15 with an eye to the emergent political and economic crisis in India/South Asia or the world. It is our single most important programming effort each year and draws a very significant audience. The previous editions of the lectures were delivered by Prof. Jayati Ghosh, Prof.Gail Omvedt, Bharat Patankar, and Prof.Kodandaram, Siddharth Varadarajan, et al.

Mr. Moyed Hasan in whose memory the annual lecture is named, was a scientist, a photographer, an environmentalist, and a person with a deep concern for the lives of ordinary people. His house, that he named Lamakaan (as in the Sufi literary tradition to mean ‘an abode for those who travel without any worldly possessions’) ” has now become an important part of Hyderabad’s cultural and political life. Mr. Hasan left behind an image of what an engaged life is. From science to art, and environment to international affairs he encompassed a vision of how we must live our lives meaningfully.

Lamakaan, An Open Cultural & inclusive Space in Hyderabad that promotes and presents the best of arts, literature, theatre, debates, discussions, and dialogue with a commitment to being open and accessible.

Join us through the li ...Read More »
7046
Bazm e Sukhan Urdu Meet Up
Lamakaan
This is an ONLINE event.

Join us through the li ...Read More »